JAX 2019 – between Docker and Kubernetes

JAX 2019 – between Docker and Kubernetes

It was time again at the beginning of May. Countless developers made a pilgrimage to Mainz for the (summer-)Jax. Since the conference is full of exciting input and impulses, we also gave away tickets among our colleagues. One of the lucky winners was our working student Ibrahim Tekcan. He summarized his visit to the Jax in his blog.

When my CC director Michael told me that there was a chance to win a two-day ticket with travel and accommodations for the JAX, one of the largest technical conferences in the IT industry in Germany, I was initially uncertain. My concern was that the interest in the tickets would be so high and the probability that I could win a pass would be very small. However, a few days later I received a surprise email with the subject "Congratulations: We are sponsoring your visit to the JAX". I actually had the possibility to participate in one of the largest events in the IT industry as a student employee. I started planning with a lot of anticipation, did some research on the program on the JAX website and decided for the first two days of the conference. I wanted to participate in the micro-services workshop on Monday and then visit the different sessions on Kubernetes and Java on Tuesday, because these are topics that I am currently intensively involved with. I was able to contact our travel team to plan the trip and they organized my train tickets and a nice hotel. The time had come on Sunday, May 5th.  I took a taxi in the middle of the day to the central station in Cologne and hopped on a train to Mainz from here. The travel team booked a hotel near the event location and the central station so that everything could be reached quickly. After check-in, I took advantage of the chance for a little sightseeing. That was my first stay in Mainz, which is why I wanted to explore the city. I walked all the way across the old city: I walked past the Schiller monument and Fastnachtsbrunnen towards the Mainz state theater on the Gutenbergplatz. Further to the east you can see the Heunensäule, the historic Renaissance market fountain and the Mainz Cathedral, a cathedral with a huge tower and monastery in baroque style. That was followed by the Gutenberg Museum and then I ended up in front of the Mainz Town Hall on the shores of the Rhine. Directly next to this is the Rheingoldhalle, which was in the middle of preparations as the event location for the JAX, but I was able to take a look inside the hall. Altogether a very successful and relaxed arrival.

From the night before, I already knew where the entrance to the Rheingoldhalle was so I was able to quickly get in line to check in. The organizer did a lot of good work and had signs with the first letter for the respective last names of the participants so I was able to quickly find my lanyard with a name tag that would offer me free access to the Rheingoldhalle and the halls in the Hilton Hotel in the days to come. I quickly found my workshop room thanks to diverse room plans as well as the JAX conference app. The all-day workshops required registration so my well attended micro-services workshop began punctually at nine. With Eberhard Wolff, I had a speaker who held an absolutely successful workshop with a great sense of humor. Initially, Wolff explained what micro-services are, what their purpose is and what must be considered. This was followed by Kubernetes, Domain-driven design as well as the most important patterns fromUbiquitous Language and Bounded Context. It quickly got more and more complex after the introduction. The input was easy to understand thanks to the many diagrams and programming examples. There were also enough breaks with snacks, fruit and sweets as well as a lunch with balanced meals to give your mind time to absorb what had all been said. You could also use the break time to visit the so-called "JAX Plaza" outside of the Rheingoldhalle where the expo was held with several booths from companies and places for the participants to sit. The atmosphere was good and in addition to the great catering, the organizer also provided for a completely worry-free package in every regard with free clothing, shoulder bags with the "JAX" logo, notepads with pens, cooled mineral water, coffee and soft drinks. The service and organization were amazing and all questions were answered by the reception at any time. In the end, I can say that my first day was a total success. I learned a lot about micro-services and Kubernetes. The first impression of JAX was definitely positive.

The main days – into the turmoil

Once the second day in the Rheingoldhalle started, I noticed right away that a lot more was going on. It started with an official greeting and introduction to the JAX in the largest hall. Due to the number of visitors, the greeting was also streamed in the Forum Nord. Four speakers led us through the history and development of the JAX. After a short coffee break, it was time to go to the Forum Nord again to my first Kubernetes session with a practical introduction to basic Kubernetes objects such as pods or services. My next session was all about the changes to Java 10, 11 and 12 and this was made clear through practical code examples. After lunch, my agenda included the keynote from Phil Estes from IBM regarding containers, micro-services, cloud and open source. I reserved the time after this to examine the exhibitor booths and the amazingly comprehensive selection of goodies - from pens to darts at one booth - and, of course, to also visit our own adesso booth and the colleagues on site. We also brought quite a bit to the JAX so that in addition to our lottery, we also had a race track at the adesso booth. After this little excursion, I returned to the contextual matters and the topic of "Strings in Java". The speaker answered many questions regarding the performance and efficiency of strings. The participants in the session, for example, could choose between different possibilities on how to convert strings into integers. The end of my day was filled with a session on deployment strategies in Kubernetes as well as an interesting session from a company that transferred their entire infrastructure to Docker and Kubernetes in just twelve months. I was able to get a lot of exciting new impulses in particular from the Kubernetes sessions. At adesso insurance solutions, I am currently working in the product development team from MIGSuite, our solution for technically complex data migration. Right now I am handling the topic of continuous integration with Docker, Jenkins, Nexus and Kubernetes. In conclusion, I can say that my participation in the JAX was productive and useful. 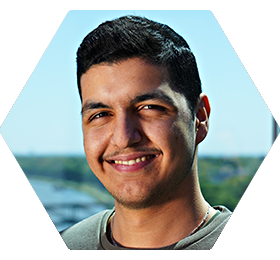 Ibrahim has been a working student at our Competence Center MIGSuite since July 2018. Here he directly supports his CC manager in projects and the further development of the product.

Do you want a new position in a motivated and successful team?