Last year, Jugend hackt in Cologne was able to prove that the world can also be improved purely digitally with code. Even if there was initial hope to meet again in 2021 in the heart of Cologne, the pandemic containment measures did not permit this.

This is why the participants from Jugend hackt in Cologne 2021 once again worked purely digitally on their vision of a better society. Supported by 13 volunteer mentors and an 8-member organizing team, about 25 participants developed digital tools, prototypes and concepts for a better future over four days. adesso insurance solutions gladly supported the event again. The result was five imaginative projects.

Digital implementation - the sky's the limit!
At Jugend hackt , open source and data protection are always in the foreground. For digital implementation, tools were therefore selected which fulfill these two criteria. This year, the sky was the limit. With the aid of WorkAdventure , a digital Cologne spaceship was built as the event location. This 2D world could not only be moved through the different rooms as an avatar, but rather also offered direct video conference connections, compliant with data protection laws,  as well as the possibility of small, spontaneous chats.

All shared program points were held on a stage, such as the the interactive input for the hacker ethics 0, 1 or 2, based on the well-known TV show "1, 2 or 3". The young people had to decide in different scenarios how they would act in corresponding situations. Particularly regarding the topic of handling open data, there was a very complex discussion with questions and statements such as:

"Should people be allowed to make money off of open data?"
"Transparency builds trust."

During the debate, the young people proved once again how reflective they already are regarding complex ethic-social topics.

The 2021 Motto
The motto at Jugend hackt 2021 is "What comes next?". The past few months have not only turned the lives of young people upside down, but rather our society was also confronted with a few challenges. However, crises can also be a driver for change and offer the chance for something new. With questions like "What comes "next?" and "What will the new "normal" look like?", we sent the participants into joint brainstorming sessions, which were held in advance to save time for the weekend on May 29th. Groups then turned initial proposals into project drafts so that at the beginning of the actual hackathon weekend, there was more time for project work and communication. At the final event. the young people ultimately demonstrated which valuable ideas, based on to the motto of "next", can arise from a crisis.

Alpaka Post - take two!
In order to create a little bit of an event-feeling and feeling of belonging together, we sent the participants care packages this year as well. Before the start of the event, the participants and mentors were given snacks, stickers and hardware build kits, as well as small gifts from adesso insurance solutions. The young hackers were able to enjoy a backpack made from environmentally friendly material and a to-go teapot made of glass. With the perfect equipment, they were able to work creatively during the event and learn something new.

Packages: Also this year we sent a food package.

The project results
On Sunday afternoon, the project results were presented to families, friends and interested individuals through a livestream. The final event can be viewed here as well. This time the projects from the young hackers were once again very creative and were based on this year's motto "What comes next?". The "Multi-Galaxy" group kicked it off. With their 2D single-player game, the participants reacted to the lack of playing options during the pandemic. This is why they independently developed a virtual adventure where various quests had to be completed to ultimately produce a vaccine.

Throughout the past few months, the necessity of having places that offer a protected space without discrimination became more and more clear. With their website, the "Safe-Space Surfing" offers the possibility of finding such places on a map and ensures maximum transparency as well as anonymity.
Several messengers work with central systems and they stand out negatively through data leaks or contact uploads. With the low-threshold "Alpaka Chat" app, the group developed a secure possibility to communicate and to do so with all standard features. 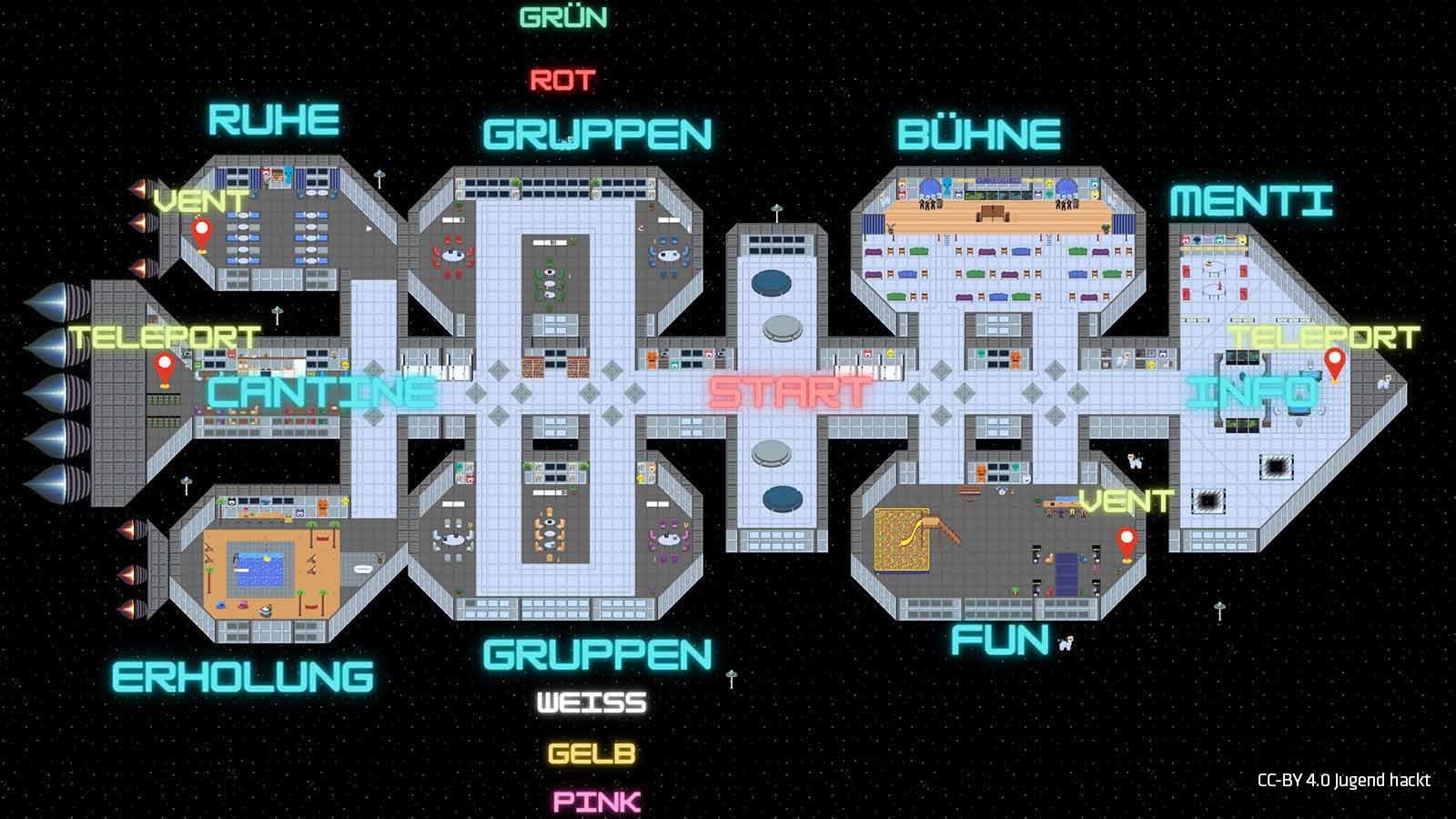 Digital event location: A digital spaceship from WorkAdventure was used as the location for the entire weekend. All participants met on the stage with their avatars for mutual program items.

It was not very easy to meet new friends with the same interests during the corona pandemic. The "FindNewFriends" group believes that hobbies offer a way to connect! And it is precisely this assumption that their idea is based for a website that allows people to find other people with the same hobbies.

The final presentation this year was by the "Wahl-p-aka" group. Right on time for the upcoming Bundestag elections in September, existing software for voting help was critically dissected and it was determined that this help is based on different voting programs. With their Wahl-p-aka, the group created a website with questions regarding voting patterns. They did not only use the electrion programs from the parties, but rather also the corresponding Bundestag voting results to assess voting orientation not just for the future, but rather also for past, real decisions. In these five projects, the young hackers were able to implement their ideas, improve their programming skills and prove once again that they can use code to make the world a better place.

The enthusiasm of all participants and the results show us once again how valuable Jugend hackt is; we are proud of being part of this as a supporter! The next event will be held in Hamburg remote from July 9 to 11, 2021.